The Taste: medium sweet and fruity. Orange again, but also some fresh green apples, and a subtle touch of coconut shavings. A medium bodies rum. The presence of some vegetal notes in the taste indicates that the sugar isn’t overwhelming.

The Finish: rather short and flat, but with the sweetness, the wood and the fruity flavours well balanced. The mouthfeel is a bit too thin.

The Rum: Don Pancha Origenes 18 yo
Origin: Panama
Raw material: molasses
Distilled: Column still
Bottled : n.i., minimum 18 yo – uncharred Kentucky casks
ABV: 40%
The Nose: starts with some spicy herbs and firm wood. Some rather unpleasant aromas reminding me of a cowshed (not to say…’organical manure’). Strong white pepper camouflages a lot of the aromas at first nosing. Not the cow poo, alas. Also hints of old leather and dried figs. After 15 minutes in the glass more warm fruit compote, some cane honey, soft vanilla and vegetal notes. This is a rum that needs time to go from rather …well…unpleasant smells to OK-ish.

The Taste: A sweet start that’s quickly getting dry and is taken over by leather and wood. There are some fruits, but it’s hard to tell what kind. It’s a bit of a mixture of tropical fruits, orchard fruits and acid berries. The whole is rather flat and, well: boring actually. Not really what one might expect from an 18 yo rum.

The finish is rather long, medium sweet and fruity. It fades away on herbal honey, hints of green tea, and gets a bit sour at the end. 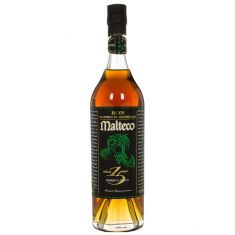 Let’s be clear: although most websites claim this is rum from Guatemala, it is in fact a rum distilled in Panama. Most websites indicate  the Industrial Licorera Quezalteca as a producer, but this is incorrect. Malteco is produced by Bodegas de America in Panama,  albeit following a method from Guatemala using sugarcane juice instead of molasses. The frontlabel says ‘Ron al ESTILO de Guatemala’ but if you look at the back label, Panama is clearly stated.

The Nose: The first nosing gives some soft vegetal aromas and sugarcane juice with warm spices. But soon the vanilla takes over. Vanilla pudding all the way, accompanied by some light muscovado sugar and a touch of wormwood. After a good ten minutes some maraschino cherries pop up.

The Taste: rather sweet with a truckload of vanilla and soft orange zest. Sweet fruits, almost haribo-sweets and red drinking syrup. The alcohol i.m.o. is perfect: not too soft and flat, not too aggressive.

The Finish is once again rather sweet but short.

Yesterday, we tried a young Worthy Park (Jamaica) that was bottled in the Transcontinental Rum Line (TCRL) by LMDW. Today, we focus on their Panama bottling

The Nose: soft and elegant, with hints of citrus and apricots, and a little bit of stewed greens on the background. The aromas all are rather soft and well balanced. It takes some time before the molasses  starts to kick in.

The finish: Medium long, with a very pleasant sweet fruitiness lingering through. Despite the longer ageing – over 6 years, mainly in Panama itself – the influence of the wood is subtle, without releasing any bitter notes.

Our Score:  a pleasant rum, unlike the Worthy Park bottled at the right age. This might not be a rum with an extreme ‘wow’ effect, but this Panama is definitely worth its price (around the €50 range). I won’t be surprised if this one will sell out rather fast!

Talk about rum from Panama, and most people immediate think of Ron Abuelo from the Varela Hermanos distillery. This distillery was established around 1940 by the Spaniard Don José Varela Blanco who emigrated from Spain to Panama in 1908. It was about 30 years later that Don José and his sons began to distil rum; and today the Don Jose Distillery controls and produces about 90 % of all rum in Panama.

So about time we try an indy bottling from this famous Panamese distillers.

Nose: the ex-bourbon casks immediately show their influence on the aroma. Lots of vanilla, with fine oak sawdust and soft but sweet molasses. I also got some white flowers (lily of the valley) and a pleasant vegetal touch. Cocos oil finishes the range of aromas.

Taste: Again rather sweet, candy, and beautiful yet subtle wood influence. As like in the nose lots of vanilla. Also very fruity, but it’s rather hard to put my finger on it. It really is a mixture of all kinds of fruit. I mainly get some mango and pineapple on syrup. Also some pepper and coriander.

Finish: long and lasting sweetness without ever getting sticky. At the very end a pleasing little bitter touch. Also some green bananas and acacia honey that stays in the throat for a long time.

Our Score : **** . A very nice, sweet and rather soft (for that almost 53 abv that is) rum. Give it a more complexity and depth and it might deserve the whole 5 stars. But 4 stars is a very, very good score.